"Not sure if debt owns me or I own debt": assignment of consumer debts and default interest rates in Spain (Opinion of AG Wahl)

Of all preliminary rulings on the Unfair Contract Terms Directive (93/13/EEC) in the EUR-Lex database, more than one-third concern questions to the EU Court of Justice from Spanish (civil) courts. The first - Océano (C-240/98) - has become a landmark decision in consumer law. Yet the highest civil court in Spain, the Tribunal Supremo, had never referred a case to the CJEU until last year. 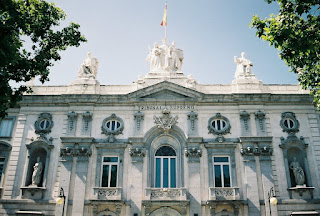 In February 2017, the TS made two preliminary references, one on terms allowing for accelerated payment (vencimiento anticipado; C-70/17) and one on clauses containing default interest rates (interés de demora; C-94/17) that are disproportionally high.

Yesterday Advocate General Wahl published his Opinion in the latter case, which has been joined with another Spanish case on the assignment and purchase of consumer debts (C-96/16).

The joined cases both pertain to (unsecured) consumer credit agreements. In C-94/17 (Escobedo Cortés), the consumers involved had started proceedings against Banco de Sabadell and alleged that a default interest of 25% was excessively high compared to the ordinary interest rate of 5,5%, and therefore unfair. In C-96/16, the default interests at issue were 18,50% respectively 23,70% versus ordinary interest rates of 8,50% respectively 11,20%. The bank in question, Banco Santander, had claimed accelerated payment and requested enforcement of the debt. It subsequently assigned the debt to a third party, which then asked to take over the bank's position in the enforcement proceedings. [N.B. It is becoming increasingly difficult to refer to the CJEU cases on the basis of party names; this case could be called Banco Santander II.] The referring court doubted whether the consumer-debtors should not have been given an opportunity to purchase the debt themselves, so that it would be extinguished. It also wondered whether the case law of the Tribunal Supremo on default interest clauses was compatible with EU law. According to this (national) case law, a default interest clause that exceeds the ordinary interest rate by more than 2 points is unfair and thus invalid. While the additional charge is eliminated, ordinary interest continues to accrue until the debt has been paid in full.

AG Wahl divides his Opinion in three parts, regarding 1) the purchase and assignment of the debt, 2) the judge-made rule on the unfairness of default interest clauses, and 3) the consequences for, in particular, ordinary interest.

"Not sure if debt owns me or I own debt..."
As regards the first part, Wahl finds that the Directive is not applicable to an assignment between two professional parties, in this case: Banco Santander and a third party. Pursuant to the Annex (sub p) to the Directive, terms giving the trader the possibility of transferring his rights and obligations under the contract may be considered as unfair where they reduce the guarantees for the consumer, without her consent. In Wahl's view, however, the case did not concern a term in a consumer contract and besides, the assignment did not change the consumers' contractual position. Consumer protection may become an issue in the relation between the new creditor and the consumers involved, but it is not (yet) a problem now. This - again - shows the limits of what the Directive can do.

Still, the referring court's doubts reveal an underlying issue with the 'commodification' of consumer debts. A third party may acquire the debt for a fraction of its value and then make a profit at the expense of the consumer. From that perspective, the question whether the consumer should not be able to acquire the debt (instead of a commercial investor) is not so strange. Moreover, it is questionable whether the assignment does not have any impact on the consumer's position at all. There is no guarantee that the third party who has acquired the debt operates according to the same standards (duty of care) as the bank that provided the loan.

A judge-made 'black list'?
As regards the second part, Wahl observes that from the perspective of (full) effectiveness of the Directive, there is nothing wrong with a judge-made rule that certain clauses are automatically unfair, although that might distort the general contractual balance (in abstracto). In this respect, it is relevant that the '2-points rule' has been formulated with a reasonable interest percentage in mind.

Wahl emphasises that courts must still be able to take the specific circumstances of each individual case into account, but he only seems to have the situation in mind that the term is found to be unfair. Whereas clauses that do not exceed the maximum of 2 points can still be deemed unfair, it seems that courts cannot deviate from the rule when they find that a clause with more than 2 points could, in the circumstances of the case, be regarded as fair. This would go even further than a 'black lists' of unfair terms that are presumed to be unfair, compiled by the national legislator. It would come down to a judge-made 'black list' that does not leave much space for an assessment in concreto.

Consequences of unfairness
Lastly, Wahl recalls that national courts cannot revise the content of unfair terms. Unfair terms may be replaced by national statutory provisions only when the invalidity of the unfair term would require the court to annul the contract in its entirety, thereby exposing the consumer to disadvantageous consequences; see our earlier reports on Unicaja Banco and Caixabank and Kásler. In Unicaja, the CJEU held that a national provision laying down a threshold corresponding to the default interest rate equal to three times the statutory interest rate must be without prejudice to the court's assessment of the unfairness of a term setting default interest. Wahl adds that if such a term is deemed unfair, it is invalid and must be eliminated from the contract. This would neither require the contract to be annulled in its entirety, nor have disadvantageous consequences for the consumer; on the contrary. In that event, the term cannot be replaced by the statutory interest rate that would have applied by default if there had been no agreement.

However, removing the default interest clause from the contract does not need to affect the ordinary interest rate in a separate clause, insofar as that clause is not unfair. The ordinary interest is meant as a compensation for the creditor who has provided the loan (a 'core term' according to Wahl), whereas the default interest intends to 'punish' the debtor for not fulfilling her payment obligations. Here, Wahl draws a comparison with a penalty clause.

If AG Wahl's Opinion is followed, it seems that what the courts in first instance and in appeal had done in the case before the Tribunal Supremo (C-94/17) is incompatible with the Directive: they had diminished the default interest clause to three times the statutory interest rate. Instead, the default interest must cease to apply completely. That will probably deter credit institutions from using excessively high default interest rates in consumer contracts, but consumers must still pay ordinary interest. How this relates to the Tribunal Supremo's other preliminary reference on accelerated payment clauses - which is also relevant for the consumers in C-96/16, against whom enforcement proceedings are pending - remains to be seen.
Posted by Anna van Duin at 12:03