As we all know, Regulation No 261/2004 on air passenger rights has been a subject of controversy for quite some time - with airlines exploring any unclarity and gap in it, in order to refuse to pay out compensation to passengers. Today, AG Bot gave an opinion concerning the interpretation of Article 16 of this Regulation - obliging Member States to create an effective enforcement of its provisions - stating that the national enforcement body does not have competence to place administrative fines on airlines, in order to force them to pay out individual compensation due to their passengers. 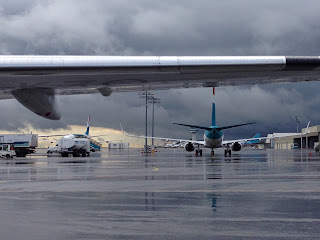 A few passengers of flights with Royal Air Maroc and with KLM, whose flights were respectively either cancelled or delayed by 26 hours, demanded compensation on the basis of Art. 7 of the Regulation 261/2004. Since, unsurprisingly, the airlines refused to pay it, the passengers asked the secretary of the State (staatssecretaris) to place administrative fines on the airlines to force them to apply the rules of the Regulation. The secretary of the State refused to do so and during the appeal as to his decision, the Dutch courts referred the case to the CJEU, asking whether the secretary of the State has the competence to issue such administrative fines. This, considering that the legal relationship between the airlines and the passengers is of civil law character, and thus civil law measures should apply (Par. 15).

Pursuant to Article 16 of the Regulation, the Member States need to make sure that its provisions are enforced and should indicate a national body, which would supervise this enforcement. AG Bot considers that the literal interpretation of the text of this provision does not lead to the conclusion that the national body supervising the enforcement of the Regulation has an obligation to use administrative fines, when the airlines refuse to pay compensation to the passengers (Par. 24). Recital 22 of the Regulation is invoked since it states that "the supervision should not affect the rights of passengers and air carriers to seek legal redress from courts under procedures of national law". (Par. 26) This should suggest that in case the airlines refuses to pay compensations, passengers should go to national courts to demand enforcement of their compensation rights instead of asking the secretary of the state to place an administrative fine on the airlines (Par. 35). AG Bot considers that the obligations of the national body laid down in Article 16 of the Regulation are, thus, more of a collective nature and do not stretch to cover compensation for breach of individual rights of passengers (Par. 28). However, it may remain in the discretion of the Member State to allow the national body to also react to individual passenger complaints, and either act as a mediator or as an advisory body, and, generally, allow out-of-court dispute resolution (Par. 32). This does not diminish consumer protection, since consumer's access to judicial justice remains a possibility (Par. 35).

While this interpretation of Article 16 of the Regulation is not surprising, during ongoing works on the new text of this legal act, the European legislator could consider giving some more teeth to the enforcement bodies, to restrict airlines' ignorance of the Regulation's rules.
Posted by J.A. (Joasia) Luzak at 21:41