Towards an optional instrument? 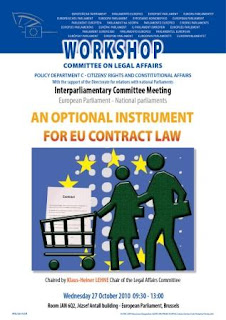 Last Wednesday, 27 October, the Legal Affairs Committee of the European Parliament organised an inter-parliamentary meeting on the idea of an optional instrument (OI) for European contract law. On the basis of a number of briefing papers from experts in the field, members of national parliaments and of the EP reflected on the possible advantages and the political attainability of enacting such a facultative set of rules that parties may choose to apply to their contract. The briefing papers can be found on the EP’s website.

Topics that were discussed include:

- the need for an OI, from the point of view of consumers’ organisations, business representatives, judges, and the European Commission;

- the extent to which an OI might increase legal certainty and foster cross-border trade;

- the material, territorial and personal scope of an OI;

- the relation of an OI with substantive rules of national law and rules of private international law.

The workshop was organised with the aim of giving members of national parliaments the opportunity to express their views on the policy direction that the EU should pursue in the field of European contract law, on which the European Commission published a Green Paper and launched a public consultation last Summer (see an earlier post on this blog).

For those of you who are following the discussion on the Green Paper, some upcoming conferences may be of interest:

- 10 November 2010, conference organised by the Centre for the Study of European Contract Law (CSECL) in Amsterdam (in Dutch; the full programme may be found here);

- 3 December 2010, colloquium organised in Brussels on ‘European Contract Law: To an optional tool for the practitioners’ (programme available here)