7 September 2010: ECJ Advocate General's opinion in case C-159/09 Lidl v Vierzon
Advocate General gave today its opinion in the Lidl v Vierzon case (English text is unavailable for now) concerning interpretation of the comparative advertisement provisions of the Directive 84/450 on misleading advertising (as amended by Directive 97/55).
Two parties involved in this case are companies Lidl and Vierzon who have a chain of international supermarkets, respectively Lidl and Leclerc. On 23 Septemeber 2006 Vierzon published in a local French newspaper an advertisement 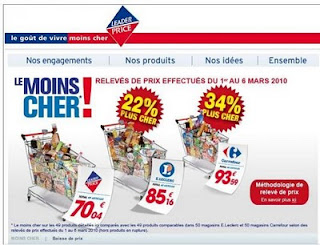