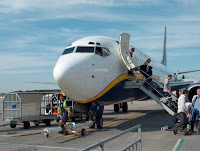 On Wednesday AG Tanchev gave an opinion in the case Moens (C-159/18) concerning interpretation of extraordinary circumstances that Regulation 261/2004 allows the airlines to claim to avoid paying compensation for cancelled and delayed flights. In the given case, the airline claimed as an extraordinary circumstance the fact that there was a spillage of fuel on a take-off runway, which needed to be closed and cleaned for more than two hours. The flight in case ended up being delayed by over 4 hours as a result thereof.


In short, AG Tanchev recommends the Court to advise the national court that a spillage of fuel on a runway, causing its closure for more than two hours, classifies as an 'extraordinary circumstance', as the event is not inherent in the normal exercise of the activity of the air carrier and is beyond its actual control.

This conclusion follows from seeing as an extraordinary circumstance not the event of spilling the fuel on a runway, but rather the subsequent decision of the airport authorities to close that runway. This decision was "not foreseeable, planned or announced in advance" (para. 23) and, therefore, may not be inherent in the normal exercise of the activity of the air carrier (para. 28). The reason for taking such a decision seems irrelevant to AG Tanchev (para. 26). AG Tanchev then relies on previous case law, such as McDonagh, Pešková and Peška, Wallentin-Hermann.

I have some problems with comparing a given case to the previous case law. In the previously mentioned cases the events that were considered to qualify as extraordinary circumstances were all extraneous not only to the airline but also to other parties, upon which the air carrier could seek redress (extreme weather conditions, birds, terrorism). This is not the case here, as the air carrier could potentially claim its losses from the airport authority, or the other air carrier, whose faulty aircraft caused the spillage of the fuel (mentioned in para. 29). This route of compensation is not, however, available to the passenger. Should we, therefore, so easily exclude from the normal exercise of the activity of the air carrier having to deal with the results of the operational decisions caused by airport authorities? This would provide a significant leeway for claiming extraordinary circumstances.

The reasoning that the closing of the runway was beyond the actual control of the air carrier and that he could not otherwise accommodate passengers' timely departure is, in turn, convincing (paras. 35-36). However, the test is twofolds and the event should both not be inherent in the normal activity of the air carrier and lay beyond its actual control. As mentioned above, contrary to AG Tanchev, I would be more hesitant to recommend the national court to consider the first limb of that test as having been met.

An interesting point mentioned in the opinion is that an event such as a spilled fuel on a runway may be classified as extraordinary circumstances, but such a classification depends on all circumstances of a given case, thus should not be automatic. For example, if the airport authorities open other runways upon closing the one, which has been contaminated, there would be no need to delay or cancel flights (para. 11).
Posted by J.A. (Joasia) Luzak at 17:07