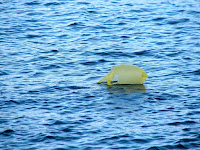 There is an interesting article in today's The Guardian by P. Barkham on how the introduction of a 5p charge for plastic bags last year in the UK has led to significant changes in consumer purchasing behaviours and ultimately contributed to better environment protection (Six billion plastic bags can't be wrong - so what do we tax next?). Logically, you wouldn't think that just the fact that consumers were faced with having a choice of paying less for their groceries if they brought their own bags, would lead to significant behavioural changes, considering the diminutive amount of the price increase. But still... of course, just the fact of having to confirm this additional charge might have been discouraging, as well as could have brought consumers' attention to the reason behind this sudden charge - environmental protection. The author poses a valid question whether tax policy is where we may expect more nudges to occur in the future.